The Centrality of the Encounter with Jesus, Word of God made flesh.

BIBLICAL ANIMATION OF ALL PASTORAL LIFE

The V General Conference of the Bishops of Latin America And the Caribbean (CELAM) which took place at Aparecida, Brazil in 2007 besides embracing a biblical focus in its call (for “missionary disciples of Jesus Christ“), proposed a new paradigm for presenting the role of Sacred Scripture in the life and mission of the Church: The Biblical Animation of all Pastoral Life. (Cf. Aparecida Art. 248, http://www.celam.org/aparecida/Ingles.pdf)

This highlighted the tradition of reflection in the Catholic Biblical Federation (CBF), which, inspired by the experience of Latin American basic ecclesial communities, proposed the Biblical Animation of all Pastoral Life (hereinafter ABP) to the whole Church at its FEBIC -LAC Plenary Assembly in Bogotá (1990).

Pope Benedict XVI set out for us the goal of ABP: To demonstrate that “the Church is founded on the Word of God, is born and lives from it“, and “to examine the ordinary activities of Christian communities, in parishes, associations and movements, to see if they are truly concerned with fostering a personal encounter with Christ, who gives himself to us in his Word” (Verbum Domini Art. 73).

Finally, Pope Francis, who chaired the Drafting Committee for the final Aparecida Document (AD), reminds us that “all evangelization is based on that Word, listened to, meditated upon, lived, celebrated and witnessed to” Sacred Scripture is the very source of evangelization. (Evangelii Gaudium Art. 178 and Introduction to Guidelines for Biblical Animation of all Pastoral Life in Latin America and the Caribbean).

FEBIC- LAC and CELAM have enthusiastically committed to dissemination, putting into practice, and living out the Biblical Animation of all Pastoral Life in the terms set out by the Synod on the Word of God

“Along these lines the Synod called for a particular pastoral commitment to emphasizing the centrality of the word of God in the Church’s life, and recommended a greater “biblical apostolate”, not alongside other forms of pastoral work, but as a means of letting the Bible inspire all pastoral work” This does not mean adding a meeting here or there in parishes or dioceses, but rather of examining the ordinary activities of Christian communities, in parishes, associations and movements, to see if they are truly concerned with fostering a personal encounter with Christ, who gives himself to us in his word.

Since “ignorance of the Scriptures is ignorance of Christ”, making the Bible the inspiration of every ordinary and extraordinary pastoral outreach will lead to a greater awareness of the person of Christ, who reveals the Father and is the fullness of divine revelation.” (Verbum Domini Art. 73)

The II Latin American and Caribbean Encounter of Biblical Animation of All Pastoral Life (ABP), took place 12-14 August in Quito, Ecuador, to evaluate the path taken in recent years and establish new guidelines for the region.

In the Roadmap approved for the period 2016-2019, the strong commitment was made to continue the mission of encouraging pastoral life based on meditated listening to the Word of God, to continue working so that more bishops, priests, deacons, religious, Religious, pastoral and lay people enthusiastically and passionately embark together this journey, and in the promotion of the celebration of a Biblical Year 2019-2020.

Updated statutes of FEBIC-LAC were also approved at the Encounter. 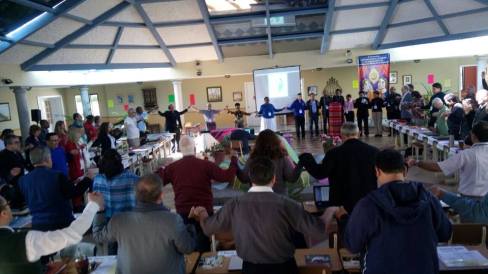 The Regional Executive Committee of FEBIC LAC met on 7-8 April 2016, in the city of Cancun, with the presence and participation of Fr. Jan Stefanow as General Secretary of the FEBIC, and Bishop. Juan Espinoza (Secretary General of CELAM Meeting in which the general and financial reports of FEBIC Lac were approved; Changes in the statutes of the FEBIC LAC, the 2016-2018 work plans were reviewed, and the programme of the Quito meeting, scheduled for August 2016, was prepared.