The Bible Refresher Course on the theme of “The Sermon on the Mount” was jointly sponsored by Latin America and Caribbean Bishops Conference (CELAM), the AEC, and the prestigious US Catholic University of Notre Dame, and established as historic precedent of being the first such course entirely in English involving CELAM which mainly comprises Spanish Speaking Episcopal Conferences of Latin America along with Brazil 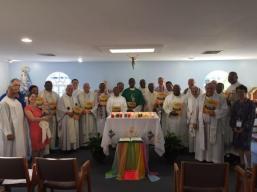 In the tradition II Vatican Council sessions and the Synod on the Word of God the Enthronization of the Word of God in the Meeting space inaugurated the Course, and each day began with the exercise of Lectio Divina on the daily Gospel reading with Bishops in their Provincial groups following the 7 Step method promoted by AEC ABP Committee Chairman Bishop Emmanuel Lafont during his years of service of poor communities in Soweto in South Africa. By happy coincidence the recommended Gospel readings for the week of the course were all from St. Matthew’s Sermon on the Mount, so that prayer followed study and vice versa.

There was also time on the agenda for presentations on the recent English Translation of the ABP Guidelines for Latin America and the Caribbean presented and endorsed at the II Continental ABP Encounter in Quito Ecuador last year August.

Based on the narrative of the Disciples encounter and recognition of the Risen Christ on the Road to Emmaus, presentations on the Guidelines were made by Deacon Mike James, Catholic Biblical Federation Coordinator for Latin America and the Caribbean, by Bishop Lafont on Chapters 1, 2 and the key ABP Mission in Community of Chapter 7, and by Msgr. William John-Lewis.

The bishops and other participants confirmed their commitment to ABP in the Antilles region, to promoting participation by multiplier Agents of ABP in their dioceses in the first CELAM CEBITEPAL Course to be conducted in English in Trinidad later this year (1-12 October in Trinidad), and support of the wider distribution and implementation of the ABP Guidelines in English in their dioceses 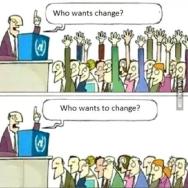 In a stirring witness at the end of the Course, Bishop Lafont noted that takes his Bible with him in his meetings with public officials in Cayenne and France and with remote local indigenous communities alike, and that the Word of God is better company on evangelizing visits than a camera.

Sharing a humorous cartoon, he noted that Change first comes in and from ourselves

“Worth mentioning among highlights are: the spread of the Bible, national biblical weeks, ecclesial communities that read and pray the Word (Lectio Divina), the biblical-catechetical dimension, the profusion of biblical documents and materials, the Month of the Bible , the social projection of the text fed by a pastoral reading that starts from the concrete reality of the people, greater sharing among FEBIC members, the growing importance in the liturgy of the balanced relationship between Eucharist and Word, and the biblical formation.

The biblical pastoral ministry little by little is understood as biblical animation of all pastoral life and the life of the Church itself.

The day or month of the Bible is celebrated in all our countries and national or diocesan biblical weeks are also held. Lectio divina is practised as the most common method and the popular reading of the Bible is returning to occupy the place it had in many ecclesial areas. Gradually ABP coordinators are contacting people in charge of different pastoral areas and joint initiatives are carried out. Catholic publishers offer more and better biblical materials, which favour and encourage the desire for greater biblical formation.

The Bible is increasingly perceived as a sacred food, as Bread broken at the common table with the brothers of other Christian confessions and with our older brothers, the Jews.